Managing the Complex Decision Logic of Business Processes with DMN

This blog post explains why and how you should integrate DMN models into your business process landscape.

As a BPMN modeler you are probably familiar with the following situation. You document a process that includes decision logic but even though the conditions are relatively straightforward you end up with an overly complex diagram.

As an example let’s have a look at a process that documents a product discount calculation. You want to determine the discount based on the parameters Customer Status and Purchase Value (in $). The Customer Status is determined through Customer Loyalty (years as an active customer) and the Total Value of Past Purchases.

As you can see, even this fairly simple decision adds tremendous complexity to the process model.

In a pure BPMN context you could thus make a trade-off between complexity and accuracy:

However both approaches are far from optimal.

The best solution for this problem is employing the Decision Model and Notation (DMN). DMN is an open and standardized modeling notation that is explicitly designed for modeling business decisions. In DMN decision logic isn’t represented as process flow but as a set of rules in a Decision Table. Each rule maps a set of input values to a set of outputs, for example, the Customer Status ‘Standard’ and a Purchase Value of less than 1000€ to a Discount of 0%.

DMN diagrams can be seamlessly integrated into BPMN models.

Let’s take a look on how to refactor the decision logic of our example process into a DMN diagram.

First, we remodel the decision logic in DMN:

To manage complexity we refactor several input parameters into one and split complex decisions into multiple sub decisions:

Then we reference the DMN from a Business Rule Task in our BPMN diagram: 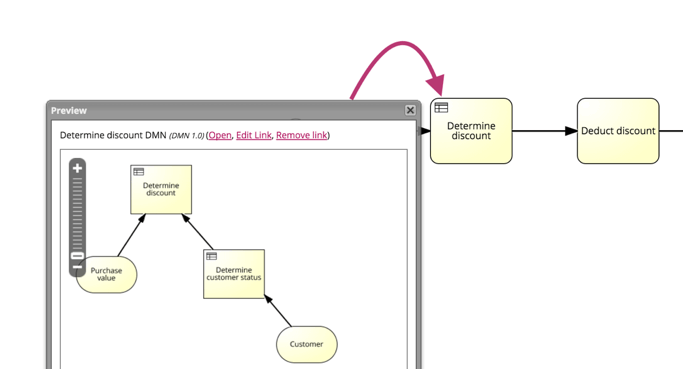 Through integrating DMN models into your business processes you gain:

For more information on how to employ DMN, download our white paper Quick Guide to Decision Modeling using DMN 1.0.

Growing Your Business With Process Management

Just Right: How To Select The New BPM Tool You Need

BPM Theory to Practice with Signavio and Hasselt University

Freshen up your processes with the Signavio BPM Cookbook

Design thinking and BPM: A match made in heaven

How To Name Business Processes Using One Word (It's Scope)

The Top 5 Mistakes You Can Make When Naming Business Processes

Future state process simulation - why & how

How to manage process variants

4 Telltale Signs You Should Reboot Your BPM Initiatives

How to Develop a Business Process

The Process Model Repository of the Future

Hello Cloud - lifting BPM to the next level

As simple as possible