Working across multiple systems, re-keying data, wasting time on boring, repetitive tasks—these are just some of the issues that frustrate employees’ efforts to do an excellent job. Management often sees these same activities as failing to add value within organizations. Both staff and managers can look at robotic process automation (RPA) as the ‘silver bullet’ to remove these issues and drive up productivity.

However, as one participant at the Global Process Owner Summit in London stated, “Using Robotic Process Automation simply to address these problems is like fixing potholes in the road.” The argument centered on the way their organization, and others, use RPA like tar. They merely patch things up as cheaply as possible, without any real thought. In further comparison, the use of automation was just a stop-gap, and soon enough the potholes in the “road” would reappear, with no fundamental business or process issues addressed.

Reflecting on this analogy, I considered the different ways roads are repaired and how this might apply to business. As illustrated below, I’ve considered four variants: 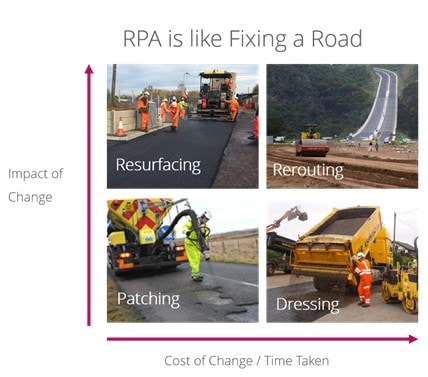 Each of these options has a different cost associated with it, along with varying degrees of impact and change.

I suggest considering how we apply Robotic Process Automation in the same way. Sure, as the speaker above suggested, we can simply apply it to cheaply solve a current problem. But what if we consider the other three approaches, too? Might we do a better job of addressing the underlying issues?

Are we just dressing the road?

For example, a traditional ‘brick-based’ retailer might replace checkout staff with automated tills, and this will likely increase store productivity, but it won’t generate additional in-store traffic. It is merely smoothing a pothole by reducing staff costs. Even if the retailer changes the store layout, carries new lines and runs fresh promotions, resulting in a positive spike in sales, this crescendo is still likely to flatline. To me, this sounds very much like ‘dressing” a road—it takes a little longer, costs a bit more, but lasts a while longer, too.

Alternatively, as more thoughtful organizations are doing, we could take the ‘resurfacing’ approach. This means creating online stores to meet shoppers’ expectations. Of course, to succeed means analyzing and creating new processes and systems to serve this new type of buyer. Building new systems and thinking about how to incorporate RPA will provide smarter, lower cost ways of reaching the customer. In this scenario, it makes more sense to start your analysis with a Customer Journey Map, rather than a traditional process model. This alternative overview helps us to consider the application of RPA, and acts as a catalyst to do things differently. We start to consider the products and services we could not previously offer. Thus, the level of positive change is greater, the benefits will be felt for longer, and even if the outcome is not as positive as expected, it will be easier to mold for future success.

However, staying with the retail example, giants like Amazon, and even Apple and Microsoft, are recognizing that the future of retail lies in bricks and clicks—that is, a mixture of traditional physical stores and online shopping options. I think of this as being a reroute of the road which bypasses towns and villages, and is something completely new.  In this respect, the change will cost more and take longer, but the value and impact of the business will be greater.

In my previous blog, Robots as Subject Matter Experts, I talk about how using robots in their simplest form, just means we risk doing the wrong things faster and cheaper. I suggest that to use them just to fix the potholes in the road, while it may be a cheap and quick fix, does not tackle any broader issue. To do that we need to start with a wider perspective and to consider what the future will look like, and what outcomes are needed for survival. We can then start to think of RPA as being just one of the technologies enabling success.

Thinking about customers and mapping their journeys, and then designing processes that optimise those interactions, means we will deliver better experiences. It also enables us to consider how we attract new customers and address changing market demands. Instead of just repairing the road, why not design a new one? With this, RPA becomes just one of the technologies available to us. I suggest that leveraging Robotic Process Automation in this way results in the broader adoption of a greater number of robots. This moves it out of the low-cost, project-based, tactical arena, and more into the enterprise-wide value-add sphere.

As an aside, when analyzing your processes and journeys, don’t forget to question your rules. You will be amazed at how much time is wasted on detailed process analysis, only to find the process is fine, but the decisions you are applying are out of date. This will have a detrimental effect by actually inhibiting the process, and causing customer dissatisfaction. But that is a blog post for another time…

How To Overcome RPA Implementation Challenges

HR for Robots: Building an RPA Workforce with Signavio