Did you hear the one about the process analyst and the octopus?

One area where Business Process Management lags on the maturity curve is the lack of a body of standard BPM jokes. You know, the kind of joke that starts like ‘A business process walks into a bar…’ or ‘How can you tell when there’s a process analyst at the door?’ Is this because there aren’t any good BPM jokes, or have we thus far failed to establish an oral tradition? Even BPM jobs seem easier to find.

This article reviews some attempts at BPM humour, in various categories. Some of these are other people’s work - credit given where due - but for some we had to resort to making them up ourselves.

The category of jokes includes the juvenile puns that we tend to call ‘Dad jokes’. Be warned: they’re awful, but maybe your kids will like them.

Q: What do BPM practitioners put in their sandwiches? A: Processed cheese.

Q: What does a process analyst do after robbing a bank? A: Drives off in the Parallel Getaway car!

Q: Why do BPM practitioners walk slowly in pairs? A: They like to process.

Q: Why don’t process analysts make good travel agents? A: Because they keep arranging Exclusive Gateways instead of exclusive getaways!

Q: Why was the process analyst team disqualified at the Olympics? A: Because they kept switching swimlanes in the 100 metres freestyle.

Fortunately, these aren’t the only opportunities for BPM jokes, especially online. After all David Weinberger wasn’t kidding when he wrote that there are two kinds of information on the Internet: the database and the joke.

These days, Internet Memes make repeated jokes more visual. Here are three, by Holly Parker and Julien Thévenod, featuring Doge and The Most Interesting Man in the World.

This is clearly a fun game, so I joined in with three of my own, featuring Internet heroes Matrix Morpheus, McKayla is Not Impressed and I Should Buy a Boat Cat.

If you’re feeling inspired, this would be a good time to head over to - that customer journey map can probably wait.

For original short BPM jokes, nothing beats Twitter, provided you can find someone who’s reliably funny. @Procesje owns Twitter’s BPM jokes top spot, which a mixture of witty and often sarcastic BPM industry observations, in both English and Dutch. Here are three of my favourites, in sticky-note format. 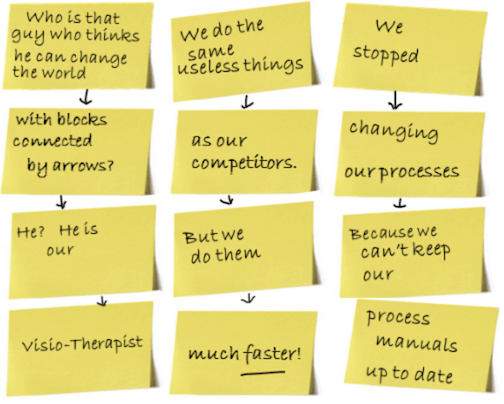 As well as the tweets, Procesje publishes more industry commentary on his English blog and Dutch blog.

At this point in our extensive research into BPM jokes, it was time to ask the industry experts. Encouragingly, my BPM.com forum post got a few more suggestions, several of which start in classic funny story format.

However, despite these worthy attempts, the most important thing the forum revealed was the identity of the real expert, in the discussion’s final recommendation: Adam Deane.

Adam Deane’s blog features an extensive collection of BPM jokes, in both story and image caption form. My personal favorite is the story of Mr Workflow, although I’m not sure that Roger Hargreaves would have approved.

BPM jokes are only the tips of the proverbial iceberg. Business Process Model and Notation (BPMN) includes plenty of material for more humour, even though its 538 page specification includes hardly any jokes at all. In fact, BPMN diagrams themselves aren’t usually funny. As industry analyst Sandy Kemsley explains, "… just like Jessica Rabbit, BPMN isn’t bad, it’s just drawn that way."

Do you know any good BPM jokes? Do your worst and send us your best! If it's one of our favorites, we'll send you our signature BPM Cookbook!

Signavio Social Day: The Beginning of a Tradition

What Makes a Successful BPM Implementation?

Signavio World 2019: At the Heart of Digital Transformation

How to Achieve a 123% ROI With Process Management

How Old Laptops Help Signavio Take the Next Step in Sustainability