IT systems play a vital role for the implementation of optimized processes. jBPM and Activiti are two widely used Open Source platforms for process automation. Numerous organizations are already operating a combination of Signavio for process design on the business level and jBPM or Activiti on the execution level. This article discusses the integration between the concepts and technologies involved. 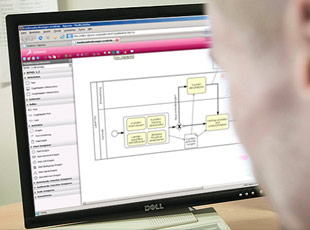 Process optimization through IT

Organizational / business-level implementation: This includes the (re-)assignment of process responsibilities, reordering / redefinition of tasks and the introduction / modification of a reporting / KPI system. Everything centers around organizational and management aspects: The process is modified as a result of a modified behavior of the people involved.

IT implementation: IT systems offers many capabilities for making a process more effective or more efficient:

There are three alternatives for IT implementations:

Typical advantages of process engines are (when compared with classical software development):

We often hear the question: So now I have captured the processes in my department using process models. What do I need to do to run it in a process engine? Can we do it ourselves or do we need to get IT involved for that?

If you have chosen BPMN 2.0 for business process modeling, you have already done an important first step. This is also the modeling language of choice for technical process models.

The business process model typically only describes which tasks have to be performed, where decision points are, where tasks can run in parallel, where information is produced or required, where the interaction with the customer happens and who is responsible for performing the tasks. The clear focus lies on topics that are important for the organizational / business-level implementation of processes.

For the IT implementation you have to go one step further: It must be specified which data is passed on in the process (variables / data objects), how these relate to inputs and outputs of tasks (data mapping), which IT functions or forms are required for the tasks, which user management should be used and how exactly decisions will be taken (decision point logic). Furthermore, there might be questions around access rights, security aspects or transactional properties.

You might have already heard that you simply need to enrich/annotate a business process model with technical details in order to make it executable. Unfortunately, this only works in very simple scenarios, e.g. leave requests or HR onboarding.

Especially the automation of core processes is often much more challenging than that. Certain parts of a process might not be handled in a per-process-instance mode but rather in a batch operation. Often, a sophisticated exception handling logic must be put in place as well. Fundamental questions about which part of the process needs to be automated at all and which part of the process might already be implemented in a different system.

Our Certified Partner camunda is a BPM services company that established a pragmatic way how to deal with the process models on the different levels.

Can a process directly be implemented by the business department? In simple cases yes. For most cases, we recommend getting the IT department involved - often this is even required.

There are plenty of process engines on the market. Depending on the use case, the following criteria might have more or less importance:

During the past years, there has been quite some discussion around “Zero-Coding” vs. “Less-Code”. “Zero-Coding” means that a graphical process model can be made executable by using predefined building blocks and configuration dialogs. The building blocks (services, adapters, transformation components, etc) cover many typical scenarios and can be orchestrated in the form of the process model. This requires data mappings in order to relate inputs and outputs of tasks.

This approach is very efficient whenever the building blocks cover all the requirements. However, this is often not the case. If not, it is an interesting question how this additional functionality can be realized. In the worst case, customization by the engine vendor would be required.

As the number of realization scenarios is potentially big, the configuration in “Zero-Coding” projects might be very complex. Sometimes this configuration even turns out to be more effort than classical software development.

Therefore, the “Less-Code” is an interesting alternative that should be considered. The main idea is that basically the same development environment and technology is used like with classical software development. For instance, Eclipse, NetBeans or IntelliJ are used as IDE, Git or svn as source code management system and Java as language for developing custom components.

“Less-Code” means that the process engine is deployed as part of the overall application. The engine covers as much of the business logic as possible. Data mappings, implementation of additional building blocks, etc happens like it was classical software development. To put it in a nutshell, it combines the best of two worlds.

jBPM and Activiti are the two most well-known process engines falling under the “Less-Code” category. Both are Open Source projects and both are using Java as basic technology. jBPM is driven by Red Hat. The Activiti project was founded by the two former main jBPM developers. It is mainly sponsored by Alfresco.

Both jBPM and Activiti are “embeddable engines”. This means that the components integrate nicely with an existing Java application development environment. This is in stark contrast to most other process engines that run as standalone systems. Here, an integration often requires web services for communication between the engine and the actual activity implementation - as opposed to plain old method calls in the case of embeddable engines.

In previous versions, jBPM used a proprietary interchange format (jPDL). Signavio can generate this format out of BPMN diagrams. An integration with modeling environments is even smoother since jBPM natively supports BPMN 2.0 XML. The most up-to-date version is jBPM 5. The older version jBPM 3 is still widely used in productive settings.

Activiti opted for BPMN 2.0 XML as interchange format since its beginning. On top of that, Activiti uses a small number of additional execution-relevant attributes using an own Activiti XML namespace. That way, Activiti allows for very elegant XML code when integrating with Java components or when using forms in a process, for instance.

Both engines support the most important BPMN language constructs.

Activiti can be downloaded and used for free as a community edition. If you are interested in a productive use of Activiti, the camunda fox engine is highly recommended. This product is basically a stabilization of the Activiti code base with a couple of valuable extensions (see also “BPM roundtrip engineering”). These additions can speed up projects significantly and guarantee a more robust system for productive use. Most importantly, licensing camunda fox is one of the few options to get professional support for Activiti - a must for the automation of core processes.

Fox shows an impressive performance: Several hundred thousand process instances per hour can be handled easily. You can also operate fox in a clustered environment or in multi-tenancy mode.

While jBPM has been in productive use for several years now, Activiti is gaining a lot of momentum lately. This is also reflected in the high number of new productive deployments.

This trend from jBPM 3 or Intalio to Activiti is especially true for many European countries. In the United States, jBPM continues to have a very strong presence in new process automation projects. This difference might be due to the fact that the main developers of Activiti are based in Europe, while many of the jBPM protagonists are located in the US.

Process modeling: What is the best tooling?

Business departments and IT department need to work hand in hand for a successful BPM implementation project. This might even require to have multiple BPMN models with different levels of granularity.

This directly leads to the question of a suitable tooling for the project.

It is highly recommended to always use a modeling platform that was designed to be used by business users - also in process automation projects. Automation projects are not pure IT projects: Agreeing on the business processes play a central role!

On the other hand, Signavio is not a full-fledged development tool like e.g. the eclipse-based Activiti Designer. This editor directly integrates with the IDE and helps to correctly use Java components as part of the process.

We often see the use of two modeling tools: Signavio is used for the business-oriented modeling and discussion of processes. A second, more implementation-centric tool is used for detailing the implementation parameters. An interchange between the two tools is realized through BPMN 2.0 XML.

There is even support that goes beyond simple import / export: Sophisticated synchronization components help to keep the process model repository and the code repository in sync.

The camunda fox product (the professional version of Activiti including code stabilization, support and additional components) sees such a roundtrip mechanism as its core. BPMN 2.0 XML is used “on the wire” but the sync components enable versioning and even realizing stakeholder-specific views on the process models: The non-execution relevant parts of the process can be hidden so that the XML code that appears in the development environment is nice and clean.

The Signavio Process Editor was optimized to enable the roundtrip:

...and how does Signavio integrate with other engines?

Signavio has already been integration into many workflow products as an OEM component. Here, the Signavio Process Editor serves as “Zero-Coding” environment. Even if different models should be created on the business and IT level, they can all be maintained in the same tool.

We already realized many scenarios where Signavio was used with other process engines. We have strong relationships with many engine vendors in order to ensure a smooth integration. For instance, a recent study shows how Signavio works with SAP Netweaver BPM.

Signavio is the ideal platform for business process modeling. The Signavio Process Editor is the best starting point for the automation of business processes - no matter what engine is used for the technical implementation.